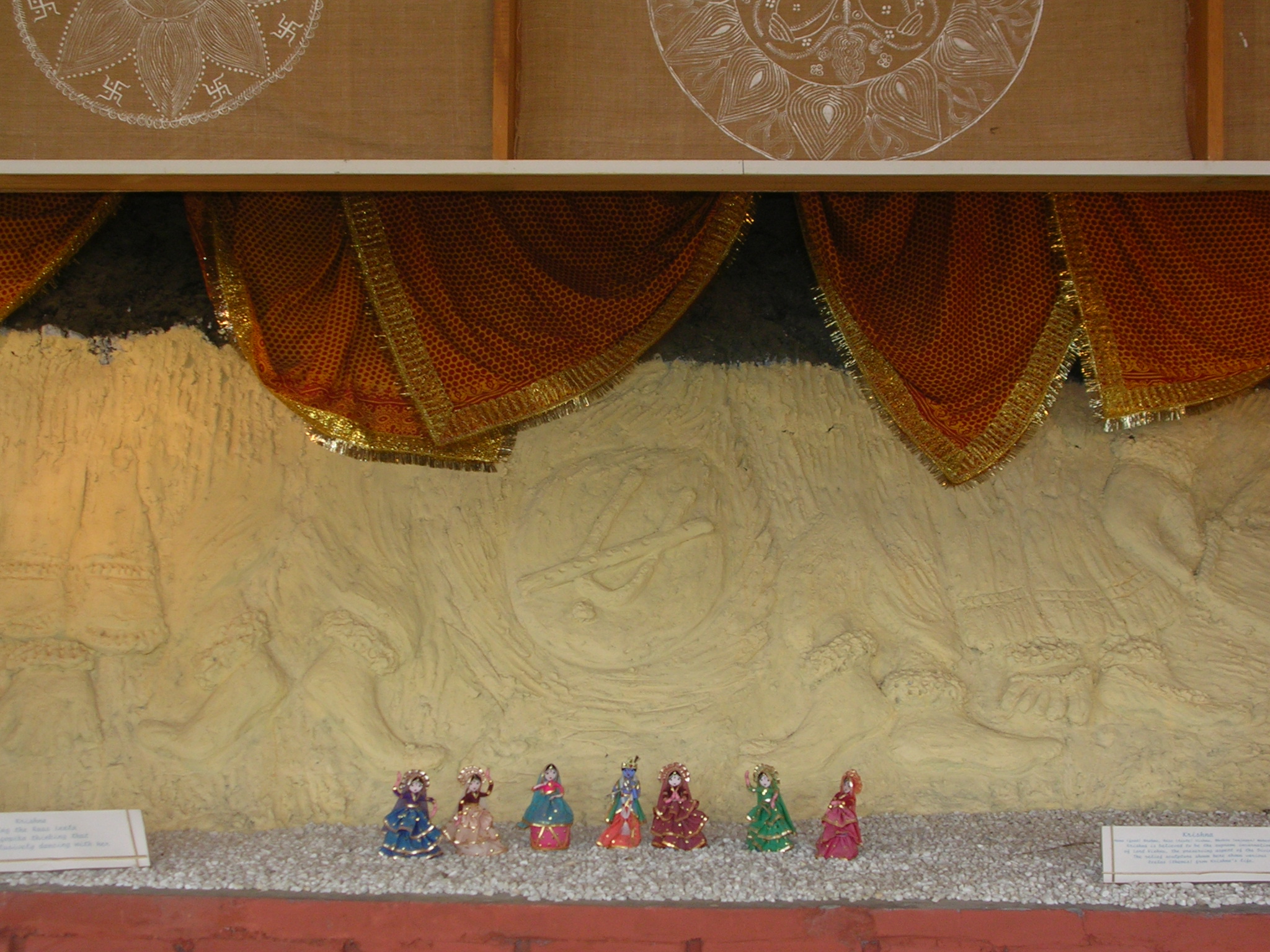 The various spiritual endeavours of a being, can be broadly classified  as :

Bhakti Yoga – This is not going to be just my interpretation but what is the undisputable knowledge about bhakti concept.

Those of us who are inclined to pursue devotion as our spiritual path, first of all need to figure out our object of devotion.

Is it the formless, abstract, undefinable supreme consciousness, or the divine who has a form and name? The former is very tough and long path while the latter has been successfully pursued for ages by many.

In India there is no dearth of choices. 330 million deities to choose from!! And one is always welcome to add new personal choices! From earlier ages or even a contemporary living deity!!

Normally a guru would advise an aspirant to pursue devotion to that deity, to whom the aspirant is in tune, temperamentally. Or a deity whose attributes would have a spiritually advancing effect on the aspirant.

Like all light bulbs are connected to the one single electricity source, all deities are one with the supreme consciousness. For the human mind’s limited understanding to come to terms with the formless, attribute less, divine, this approach of choice of deities has been presented.  A devotee is at liberty and in fact encouraged to place his chosen deity on the highest pedestal amongst other deities.

Having chosen the deity, or more likely the deity pulled the aspirant towards itself, comes the next step.

A deity lives in a name, a form, an abode and leela (stories of deity’s deeds). The devotee has to understand which of the deity’s names, he can choose and repeat as mantra. He has to further visualize the form, from the description of the deity. He can make efforts of visiting the deity’s abode. He has to read, listen and share with interested fellow devotees, of the deity’s leela.

Now comes the next step. finding a relationship with the deity. There is lot of choice here. Some common ones are that of a child to parents, or vice versa, a sibling, a friend, a spouse, a partner, a lover or  an extra marital lover, a servant, or an enemy.

The purpose being, any relationship which can help, draw out the strongest emotions in the devotee. This need not necessarily be disclosed to anyone. There is no competition in bhakti. The deity is capable of having exclusive all fulfilling relationships with each devotee. Thus there is no need for any jealousy.

The stronger the bhaav (attitude, feelings) of a devotee, the greater would be his progress. The bhaav is always reciprocated by the chosen deity. Whether a deity from ancient times or a contemporary living deity, there are umpteen stories of how out of nowhere the deity manifests to help, be with or interact with the devotee, on a strong bhaav from devotee.

Towards developing this bhaav, the following, known as Navadda bhakti (nine techniques are employed)

2). Chanting His Name and Glory (Kirtana)

5). Worshipping Him as per the Scriptures (Archana)

6). Prostrating before Him (Vandana)

9). Offering Oneself to Him (Atma Nivedana)

Now interestingly, unlike raja, gyan or karma yoga, liberation is not the goal in bhakti yoga. Instead of dissolving one’s ego totally and submerging in the supreme consciousness, the devotee wishes to hold on the separation between himself and the deity, so that he can continue to enjoy the bliss of devotion to his deity.

There are four final stages in bhakti yoga.

Sayujya – when the devotee submerges in the deity.

Sarupya – when devotee gets the form of the divine.

Samipya –when the devotee gets to be in proximity to the deity.

Salokya – when the devotee gets to be in the same abode that of the deity.

Of these, the Sayujya one, devotees do not aspire for, as they compare even liberation to worse than hell. This is as they cannot and don’t ever want a state where they cannot enjoy their deity and remain devoted to the deity.

Then their devotion would grow.

No mix and match should be done, as that would dilute the bhaav and even raise  doubts of his own deity’s greatness in devotee’s mind.

In advanced stages of bhakti yoga, the devotee starts seeing the same deity in all deities and others too. At that time, all names and forms are to the devotee, of his deity only. Initially it is strongly advised to hold on to one single deity and one mantra.

Shukl’acharya, a recognised spiritual master, (www.shuklacharya.com), had initially started this group for those who have been with him, at sometime in their spiritual journey, for satsang, before opening this group to all who are on their voyage to higher consciousness.

Thus those in your voyage, to higher consciousness, can initiate a topic/ subject / thought/ feeling, which you wish to share or seek answers to. And the answer can come from any one or more of you, including Shukl’acharya, though not necessarily so.

This is the spirit of Satsang, where ‘sat’ drives anyone to ask or share and the same ‘sat’ drives one or more to answer. Thereby enlightening others who need such knowledge.

Margarita Vergara international transpersonal art therapist, hatha yoga teacher and writer stayed with her partner Michael Schmidt, mechanical engineer from Germany, for 6 weeks in April and May 2012 This place is to me a portal for humanity. I came here with my partner to reconnect and deepen our yoga-asana practice and knowledge. I am deeply grateful for what happened in these 6 weeks. I feel I grounded myself, coming back to reality. At all times I felt looked after and safe. As a couple i…

Aditi Banerjee Corporate Tax Lawyer New York stayed for 4 weeks in Oct 2011 I whole heartedly recommend a visit to Shuklacharya’s Retreat & Spiritual Centre for anyone looking for a aptly named wellness holiday, yoga / Ayurveda therapy, a beautiful tranquil and spiritually restorative Himalayan holiday.; a yoga meditation retreat, self discovery and / or discovery of the ancient wisdom and knowledge systems at the root of Indo Vedic Hindu civilizations and traditions. Everything at Shuklacha…

Kim Pihl August 2011 The owner of The Farm Yoga and Wellness Centre – New Hampshire The experience I had at the Shuklacharya’s Retreat & Spiritual Centre was very good for me.   I felt cared for and safe there.  Samrita and Shukl’acharya are wonderful and full of knowledge.   I enjoyed their company ,had nice talks, and outings together.   The staff was attentive and polite .  The food was good. There was always plenty to eat with occasional sweets and special requests. My room was neat …

Melissa Rees – banker from New South Wales Australia came in March 2013 for 200 hours YTT Dear Shukl’acharya and Samrita, I would like to thank you both for making my learning adventure so beautiful. I never thought that I would learn so much in my one month stay. You both have taught me so many things that I will carry with me for the rest of my life and hopefully teach to my friends and family. You and your staff are so warm, welcoming and kind. I have now found a new appreciation for food…

Julie & Francois Gerland from France Julie & Francois Gerland from France were here conducting a divine mother meditation retreat in April 2013 A truly inspiration place where everything is done to offer a true moment of enjoyment and peace to the guests. Genuine care and spiritual values hsow in every detail. The delicious food is prepared consciously and the staff is outstandingly friendly. The hosts, whose care, attention and willingness to share the treasures of their soul is a blessing …

Ananthnarayans: Rajan & Maheshwari December 2003′ This short note in poem form has been written by Adarsh Rajan, then a student of standard 6th, who had come along with his parents, Shri Rajan Ananthnarayan & Smt. Maheshwari Ananthnarayan.from Bombay. Rajan, an engineer is with the Reliance group, while Maheshwari, a chartered accountant, teaches in a management college. ‘Himalayas’ What an adventure it is The devotion is so clear It is such a beautiful wonder You can experience heights without…

Susan Shaw UK Susan is a highly reputed fashion designer whose works are sold in leading malls and retail outlets like Walmart etc. She took time from her busy schedule shuttling between LA , Europe and Asia to have an individual yoga retreat at The Satvik, Bhimtal, Himalayas – July – August 2007. ‘The location is amazing, the food incredible and the service gracious and attentive. The 10 day customized yoga and breath work (pranayama) retreat was so different from anything i have experi…

Valerie Moselle – Santa Cruz ” USA “I had the great honor of studying with Shukl’acharya and his wife Samrita at the Satvik Mode in Gurgaon, Haryana in 2006.  My family spent just under 6 months outside Delhi in Gurgaon where my husband was working.  I had been teaching yoga in the States for upwards of 5 years, and had always wanted to come to India practice and study.  Despite my exposure in the States, I had never felt drawn to the teachers with whom most Americans travel to India to st…

Agnese & Yves Vander Velde European Commission Brussels 14h to 17th November 2010 We spent only three days in this gorgeous place. The food was absolutely delicious, naturally prepared without much oil or spices, and no onion or garlic. We enjoyed every little bit of it. We learnt a lot about Ayurvedic lifestyle from Samrita & Shukl’acharya, the founders of Shuklacharya’s Retreat & Spiritual Centre. Both took very good care of us and we felt like at home. I recommend this place, Shukla…

Adela Barcia Santa Barbara California USA April 2013 My experience at Shuklacharya’s Retreat & Spiritual Centre was extremely special. I found the accomodation and the food to be very comfortable and felt very supportive to my health and well being. Our hosts were both gracious and helpful to any needs that came up. They presented an opportunity alos to learn about their heritage, culture and deep spiritual understanding. I feel most grateful for all they offered. With love and light Adela…